To start things off, here’s a pic from last week’s project in the realm of tragedy and set to the Yeats poem: 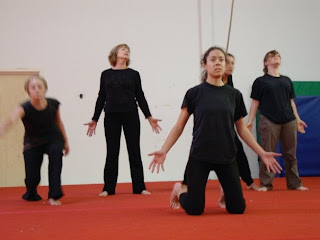 This week is described on the Dell’Arte International website as:

Week 3: THE DRAMATIC REALMS: The Human Comedy
With a focus on craft–  rhythm, timing, partnership, entrance/exit, dynamics, the mask and more – this week engages the atypical playing of comic types through work on theme and the timeless situations of the human comedy.

We’ve spent the week with an acrobatics session and ‘games’ session every morning, and a comedy and mask session every afternoon.  I have to thank Minneapolis’ Brave New Institute for superbly preparing me for the ‘games’ section because it was a bunch of improv!  It was one of the few parts of the workshop so far where I’ve felt like I know what’s going on.
In addition to all this class work, we also had to present a fictional infomercial today.  This was a super fun project and was ten times easier than the tragedy project last week. Here’s the least blurry pic I could get my hands on (we were selling a product called “Gap-B-Gone” which was for those unfortunate gaps that can occur at the beach or with low-rise pants): 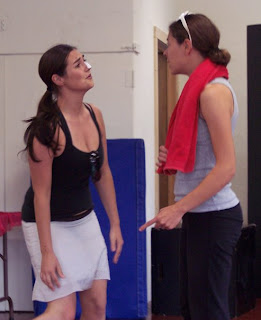 And here are a couple videos of me doing my new acrobat tricks (not too fancy, just rolls and a cartwheel, but exciting none the less, having dramatically exited the world of gymnastics at the age of 6, only to re-enter 21 years later!)