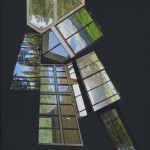 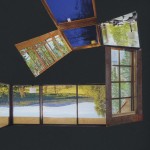 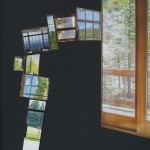 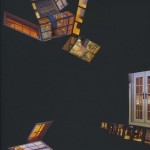 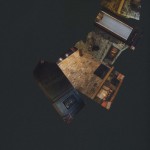 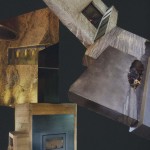 This series of collages builds on my previous work with McMansions, the large ostentatious modern houses that are cheaply built and are often considered lacking in architectural integrity. The content of these collages was taken from a magazine entitled, Mountain Living, during my residency at Jentel Artist Residency.

Through this subject matter, I focus on excessive consumer culture by putting visual emphasis on the recurring markers of affluence that regularly appear in such home decor magazines, such as large windows framing picturesque views of nature, or a wide selection of fireplaces – both decorative and functional. I am interested in the environmental and socio-political impact of these homes, as well as how these magazines generate further desire in the consumer class.

Formally, I am interested in emphasizing the repetition and sameness that occurs in much of this advertising material. The arrangements foreground absurdity through the impossibility of the arrangements.