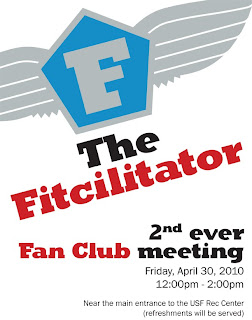 TAMPA, FL – The 2nd Ever Fitcilitator Fan Club Meeting will feature refreshments, and further discussion of exactly who The Fitcilitator is, and what the details of her existence are.

Don’t worry, you don’t HAVE to do the tests – they’re just there if you want to give it a shot, or want to try to win the prizes. EVERYONE IS WELCOME! Bring a friend or 5! There is no charge for this event. This project is partially funded by a USF Women’s Status Committee MiniAward.